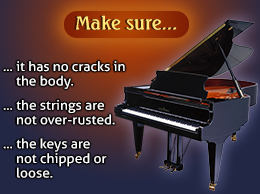 Moving a piano tends to throw it out of tune. Therefore, it is advisable to get it re-tuned after it is brought home.While most items depreciate in value very soon, a piano does not. In fact, some musical instruments are known to sound better, the more they are played. But obviously, that depends on how they have been handled.

A serious pianist, for example, will keep his instrument in top shape while an amateur may handle it roughly. Someone who has lost interest in playing it may think of it as an ‘object that occupies a lot of space’, and put it up for sale in the used piano market. To make the right choice and be able to buy the best piece, you need to examine the instrument and know why it’s being sold. This used piano buying guide will help you find a good deal.

▸ What to Check for
▸ What to Ask the Seller

Looking at the piano and checking how it sounds will help you know the condition of the instrument and how well it has been maintained. Asking the seller about the previous owner of the piano, the period for which he has used the instrument, and why it’s being sold, will help you decide whether to buy it or not.

Condition of the CaseObserve the case carefully. If it has faded on any one side, chances are that the piano was kept standing by the window, with that side facing outside. A damaged case may indicate rough handling of the piano.

Inside the CaseOpen the lid and see how the box looks from inside. If you see cobwebs, small insects or mouse droppings, it is a clear sign that the piano was neglected. While these things could be cleaned easily, the one thing that should not be taken lightly is the infestation of termites. Who would want to buy such an ill-maintained piano?

SmellA pungent or unpleasant odor is sure to make you feel not wanting to buy the instrument. An old, unused piano that has not been maintained well, may smell of rust. Any other peculiar smell, such as that of mold, indicates that the piano is unmaintained and has not been touched for a very long time.

Alignment of the KeysBend down and observe the level of the keys. Check if they appear uneven. Have a closer look at the middle keys because they are the ones that are played more. Also, check for their looseness. Place your finger on each key and press it lightly to check if any of them is loose. You may find a problem with only some of the keys. Know the reason behind the same.

Play the PianoAs a test, play the piano by pressing each of its keys. Check for any odd sound, no sound, keys sticking, and tired or tubby sounds. See if there is any vibration, rattling, buzzing or any other unusual sound produced by any of the keys. Again, check the reason behind this.

PinblockThe pinblock holds the tuning pins in place. If it becomes cracked, the tuning pins eventually become loose and this in turn could cause the strings to rattle against the loose pins. Replacing the pinblock is a costly affair.

HammerConstant hitting damages the hammer. Observe the felt of the hammerheads carefully. Check if it has deep grooves. Usually, the felt can be trimmed to get back its round shape. But in some cases, the felt is so badly worn out that trimming is not possible. In such cases, the felt is all the way worn through and the wood molding is seen striking the strings. Replacing the felt is not easy.
Companies like Steinway and Baldwin offer replacement of the piano’s spare parts. But for other brands, the replacement may be expensive, and yet not give you the satisfaction of owning a piece of grandeur. If you are going to be replacing parts of the piano, repairing it, and re-tuning it before use, you might as well get a new one.
[Back]What to Ask the Seller

Why has the piano been put up for sale?If the owner thinks that the piano occupies too much space and that he wants to get rid of it, it’s a sign that the piano has not been used for some time. The owner may give reasons like; “nobody is using it anymore”, “the person who used it no longer stays here”, “I need money” or “I want to clear some space”. Such reasons are indicative of the owner’s neglect towards his instrument.

Who has used the piano?Was the piano used by a professional or a hobbyist? Was it used in a school or music academy? Who all have used it? Answers to these questions will let you know the owner, the users, and their type of use.

How often was the piano tuned and by whom?Anything less than twice a year, done by a not-so-skilled technician or by someone who didn’t understand much about pianos, is an indicator of an instrument uncared for. You can consider buying it only after a professional checks its condition.

Where was the piano kept and how often was it moved around?Was it kept very close to a window or the fireplace? Was it placed in the basement or in an area that lacked humidity control? Was its location changed often? Was it damaged during transitions? The answers to these questions will help you know the condition of the used piano.