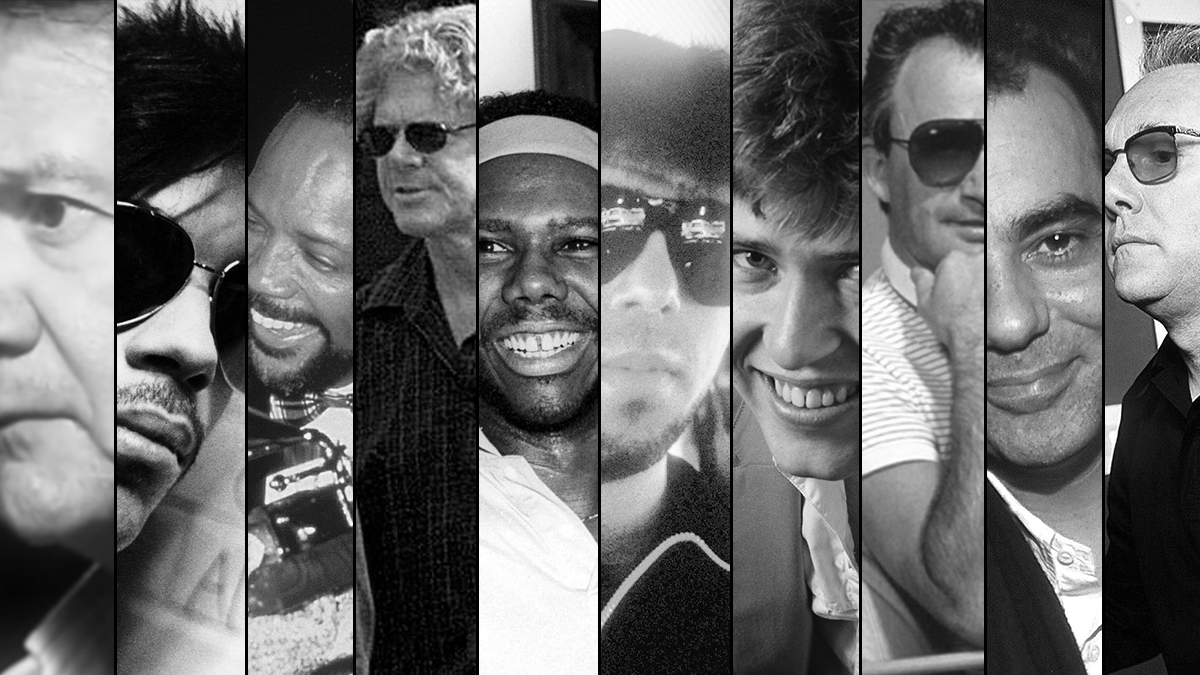 You came, you pondered on our list, and you voted in your droves. So don’t just sit there: get clicking to find out who you thought really steered the sounds of the decade that launched MJ into super-stardom, defined the sounds of new romanticism, or made metal heavier than a heavy thing.

And let’s not forget his work as an engineer earned him credits with the likes of Bruce Springsteen, The Rolling Stones, David Bowie and Journey, plus a fair few more.

Steve and Toyah Wilcox in the studio.

Kicking off our countdown from 10 to the big one is Bob Clearmountain. During the 1980s Bob produced some absolute heavyweights including Tina Turner, Hall & Oates, the Pretenders and Simple Minds

U2, The Smiths, XTC, Siouxsie and the Banshees, The Stones, Big Country, The Pogues and Peter Gabriel have all one thing in common: Steve Lillywhite.

The Surrey-born producer was part of some big records during the 80’s, but perhaps one of his most notable contributions was the invention of Gated Reverb, the sound that formed the basis of Phil Collins’ sound.

‘Poolside Giorgio’ was one of the more popular models in the merchandise range.

Giorgio Moroder is a man that needs no introduction and the king of electro-disco also featured in the top 10 of our best producer of the ‘70s poll.

His work during the ‘80s was very much in demand and he helped carve out hits for the likes of the Eurythmics, Berlin, Blondie, Human League and of course Donna Summer.

Nile Rodgers rose to fame in the late ‘70s as co-founder of Chic, but it was his notoriety as a producer in the 1980s that gets him a place in our top 10.

One famous collaboration came in 1984 on David Bowie’s Let’s Dance and perhaps one of the most nerve-wracking experiences of his life.

This relationship paved the way for one of his most prestigious pieces of work; 1987’s Grammy Award winning The Joshua Tree.

Weren’t they all so young?

Leading us down the home-straight to the pinnacle of 80s production prowess is Mr Def Jam himself, Rick Rubin.

Over the years Rubin has become one of the most in-demand producers of our time. His early production work straddled two worlds that, seemingly, couldn’t be so far from one another if they tried; that of heavy metal and hip-hop. Rubin’s most successful work of the decade was with the likes of Slayer, Run-D.M.C and the Beastie Boys.

“That don’t impress me Mutt!”

Robert John “Mutt” Lange hits our top 10 list with a veritable smorgasbord of huge artists of the time. High praise is due for his work in producing the second best-selling album of all time; AC-DC’s Back in Black.

His other production work includes working with the likes of Def Leppard in their prime where he co-wrote much of their material.

Prince backstage at the Paradiso, Amsterdam – 1981.

It’s hard to talk about the ‘80s with mentioning his royal badness: Prince Rogers Nelson. While his own work is certainly worthy and dominated throughout the decade, his other production credits of the ‘80s cannot be ignored.

Without Prince we wouldn’t have the likes of Madonna’s Like A Prayer and albums from Sheila E, Chaka Khan, Jill Jones and Sheena Easton.

Trevor Horn in his natural habitat.

To describe the archetypal sound of the ‘80s and this man will be behind most of the artists you can think of.

Trevor Horn is often credited with inventing the ‘sound of the eighties’ and no more sum up that sound than Frankie Goes To Hollywood.

Their 1983 smash Relax was banned by the BBC in 1984, while at number six in the hit parade and subsequently topped the UK singles chart for five consecutive weeks. The follow-up single, Two Tribes, took to the top spot for a record-breaking nine consecutive weeks, during which time, Relax drew resurgent popularity climbing back to number two.

Let’s be honest with ourselves, we all knew this poll was going to be a two-horse race between Horn and Jones and while Quincy ran the race at the front from the start, it was a very close run thing.

Quincy Jones’ work with Michael Jackson propelled the smooth criminal into super-stardom with the best-selling album of all time: Thriller.

Having first worked together on 1979s Off The Wall, the pair’s final outing together was on the Bad album and in just those three albums amassed well over 100 millions copies sold.

Of course it would be too easy attribute Jones’ success during the ‘80s just on his work with MJ, but his production credits throughout the Thatcher years also included working with the likes of Miles Davis, Ray Charles, Frank Sinatra, Aretha Franklin and Barbra Streisand.