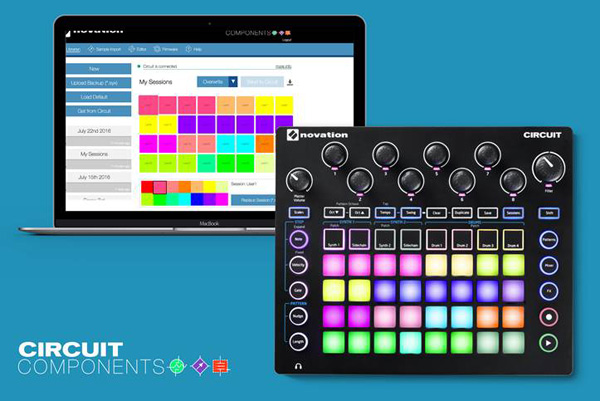 The update, which is recommended for all users, delivers several feature requests from Circuit’s dedicated owners’ group, plus a number of usability tweaks that make Circuit one of the most capable music-making platforms on the market.The free v1.3 firmware update for Novation’s Circuit groovebox makes it more streamlined and powerful than ever.

So for example, you can have a kick and a snare on ‘Drum 1’, freeing up other tracks for additional instrumentation or sample playback. This totally transforms Circuit’s drum- and sample-programming functionality and opens it up to new styles of music.The brand new Sample Flip function lets you create multi-sample drum lines on each of Circuit’s drum tracks. In previous versions of Circuit firmware, only one sound could be used on each drum track. Now, you can select a different sample for each step in all four of the drum tracks.

Using the Circuit Librarian — part of the Components suite of browser-based tools (see below) — you can now change the colour of the LED that represents your Session on the Circuit hardware. This means you can use colours to differentiate styles — pink for house, orange for Techno, for example — or to discern between different sections of your songs: green for intros, purple for main sections, say. Also new with Circuit v1.3 is the facility to manage sessions individually, rather than in a batch of 32.This commonly requested feature lets you play and preview your samples without programming them into a pattern. In the studio, this speeds up the drum-programming process immensely due to the speed at which you can audition sounds. On stage, you can live-play any sample along to your existing drum patterns, using Circuit’s velocity-sensitive pads. Let the finger-drumming commence. Session Colours & Single Session Backup.

Updates have been made to the Sample Import tool in Circuit Components (more information below). You can now change the placement of your samples so you can, for example, group similar sounds together to make it easier to remember which sample is on which pad. (For example, you could have kick drums on row 1; snares on row 2; vocal snippets on row 3.)

A bug relating to the timing of Session switching (leading to the very occasional missed playback of sounds on step one of the proceeding Session) has been fixed. Long samples, which were automatically faded out in prior versions of the Firmware, can now be played in their entirety, providing there is sufficient sample space on the Circuit.

Within days of it landing in public hands, it became clear that Circuit wasn’t just inspirational for making music. It seems as though everybody who gets hold of Circuit has something to say about what it could be – as well as how great it already is, of course.

These ideas, coming in through email, Facebook, even over the phone to our support team, are the direct inspiration for Circuit Components. So perhaps what we’re suggesting is: if you want to know what’s coming next, ask the users.