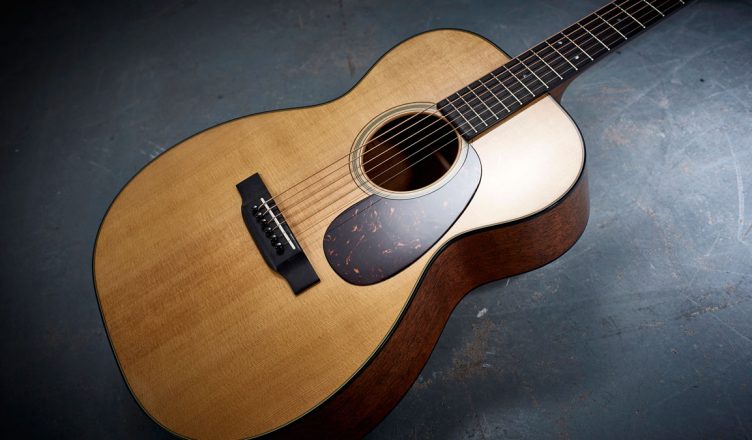 It isn’t easy to justify this 00-18. The new and cheaper 17 series has more ‘old Martin’ appeal, as does the previous 00-18V. But if your heart rules your head, then it remains a difficult guitar to pass by.

Compared with the mighty 000/OM, 00-size Martins are now a more select breed, especially in this 14-fret 00 shape.

There are only four currently on offer, from the start-up 00X1AE to this 00-18, launched at 2016’s Summer NAMM and described by Martin as an “updated version of the popular 00-18V”.

It joins the existing 000-18 and the D-18, the start of Martin’s Standard series. And while both of those models have cutaway-electro siblings, the 00-18 remains purely acoustic (you can order the factory-fitted Martin Thinline Gold Plus VTI, which adds around £175).

According to Martin’s records, 00-18s date back to 1873. However, our 14-fret model originates from the 1930s during the transition from 12-to 14-fret instruments with their longer, narrower necks and shorter, square-topped bodies.

Martin’s director of Museum And Archives, Special Projects, Dick Boak agrees: “Yes,  I think the 000-18 took over from the 00, being more projective.”

It has a ‘C’ shape, with a hint of a V, which would be hard to dislike. The bridge changes, too, from the V’s Vintage Belly to a Modern Belly and, with it, slightly narrower string spacing at the bridge of 54.8mm, as opposed to 57.2mm.

You’d expect a clean build at this price – and it is, right from the smart interior, classic dovetail neck join, and the faultless nitrocellulose finish with its toned top coat (clearly ultra-thin as you can see the ripples of the fine-grained Sitka spruce top) to the beautifully detailed grain of the mahogany black and sides.

It’s all understated: there’s the black Boltaron binding with its inner purfling strip, a simple ring rosette, and austere Old-Style 18 abalone dot inlays on the jet black ebony ‘board with its cleanly installed vintage-style small frets.

The nut and compensated saddle are bone, the Grover vintage-style ‘Butterbean’ tuners are more than up to the job, and a Plek setup ensures first-class playability with an almost over-low string height.

If you sit at home practising, playing for pleasure, writing songs, we say, don’t play this guitar. We were more than taken with the new OMC-18E, but whatever is in the water here seems to sweeten that more stage friendly beauty with a subtly more relaxed string tension and a balanced richness that sounds old and classic equally, untroubled by the ‘improvements’ of modern luthiery.

Even in the short time we have to evaluate it, it seems to mature by the hour. But while, in isolation, this is an appealing piece, we headed to London’s Denmark Street – to Martin distributor’s Westside’s showroom – to listen to the new 00-18 compared with the guitar it replaces, the 00-18V, and of course, the 000-18.