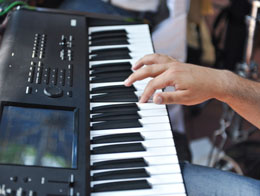 Nowadays, technology is being used big time in the music industry. It is clearly apparent in the wide range of instruments used to create sound effects. One good example of such equipment is the synthesizer. Many might have a general idea about this instrument and how to play it, but very few actually know how it works to create a wide range of sound effects. A synthesizer comes with advanced music processors and parts which help in creating different music effects.

What is a Synthesizer?

A synthesizer is an electronic device that does the job of generating electric waves of certain characteristics, and then modifying them by using built-in analog and digital technologies. They come in various shapes with different functions, and may be just a standalone effects sampler, an effects device with a keyboard, or even incorporated in an electric guitar. However, today you will find a majority of these synths fitted along with a keyboard. As a result, a high-end arranger keyboard with complicated functions and design may be referred to as a synth.

How Does a Synthesizer Work?

A synthesizer works in a totally different way than a traditional piano. In an acoustic piano, the sounds are produced when hammers that are connected to individual keys, hit on strings that are stretched tight. In synthesizers, the sound is mainly generated with the help of components known as electric oscillators. When a key on the keyboard is pressed, these oscillators use electricity to generate waves of different wavelengths and levels. After the waves are created, they are processed by a component known as a filter. This is what modifies the waves to have either a bright or a dull tone when they come out of the speaker. Next, the waves are processed through the internal amplifier which boosts the gain. The last stage of sound processing is when the waves are acted upon by the modulator and envelope generator. These two devices are responsible for controlling and majorly altering the change in pitch, tone, sustain, and fading out of the sound produced. The waves are then sent through external amplifiers and then to the speakers where they come out as sound.

The sound is generated and processed in four stages; viz. attack, decay, sustain, and release. The attack phase starts from when a key is hit and the sound is created, and lasts till it reaches the peak. Decay is when the sound starts to decrease and this stage lasts, till it reaches a steady level. When the played sound has a constant range, it is at the sustain level. The last phase release is when the ‘sustain’ is over and the sound fades out. Remember that digital keyboards also function somewhat in the same manner as synths. In analog synths, voltage-controlled amplifiers and filters are used; whereas in digital ones, digital amplifiers and filters are incorporated to produce the desired effects. The following part of the article concentrates on some of the common effects used in synth sounds.

The most commonly used effects on a synth or a keyboard are sustain, tremolo, pitch, and reverb. Note that these are effects which are controlled using knobs and buttons on the exterior of the synth. Sustain is an effect which includes an extension of the sound produced. A good example of this can be of a bell sound. When a bell is rung, it produces a constant sound for some time. This is known as sustain. This effect is quite useful when you need a fuller sound from the keys. Next is tremolo, wherein the sound goes in and out, giving out a wavy kind of effect to the note. This effect is used as a backup in a musical piece or melody. Pitch is an effect which you can play around with and create many unique tunes. You can change the pitch of any played note, usually with using a pitch bender or a pitch wheel. Another common effect is reverb which when used, produces a background sound to the primary tone, much like an echo. If you use a standard reverb with a note, it will sound as if you are playing in an empty hall. Similarly, there are hundreds of effects and modules embedded in the synth machine.

If you want to listen to different sounds that synthesizers are capable of producing; you can listen to synthpop, trance, or electronica music. Knowing how to use these effects properly is important to play a keyboard or a synthesizer. If you are planning to buy one, you can consider models from world-renowned brands such as Korg, Nord Keyboards, Roland, Moog Music, Kurzweil Music Systems and so on. These devices are most suitable for those who want to produce sounds of different musical instruments for live shows or studio mixing projects using just a single instrument.