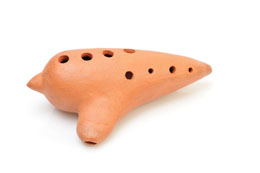 The history of the ocarina can be traced to ancient China where it originated around 12,000 years ago. There are many types of ocarinas available today. To play the ocarina, you need to blow air into it, through the windway or the mouthpiece. The air resonates inside the ocarina and it is this resonating air that generates the sound you hear. The ocarina comes with a string attached to it, which enables you to wear the instrument on your neck, thus minimizing your chances of damaging or losing it.

When compared to a flute or most other commonly used musical instruments, the ocarina has a major drawback: it can only produce the sounds of the first octave. This is because the second and the third octaves are generated as a result of harmonic overtones and this is not possible in an ocarina. To overcome this, there are ocarinas designed to play higher octaves. For example, to play tones that are one octave higher than the normal notes, you can go for a C ocarina. Also, on an ocarina, you don’t get the exact pitch as you would, using any other instrument such as a piano. However, since the pitch can be controlled, to some extent, by the speed with which you blow air into the mouthpiece, what you should do is to try to settle at a pitch that is closest to the original. Nevertheless, learning how to play an ocarina is easier than learning to play a flute, and with a little bit of practice, you can master playing this humble instrument in no time.

How an Ocarina Works

To create music on an ocarina with different notes, you need to cover or release a few of the holes. If you are wondering why different holes create different sounds when left open or closed, then you’ll find the answer if you look into how an ocarina works. Interestingly, each of the holes on the ocarina are of a different diameter, as opposed to a flute in which all the holes are exactly the same. Now, when you blow air into an ocarina, the type of note created would depend on the ratio of the total area of the holes kept open and the total volume of the ocarina. In case of a flute, the note is influenced by the length of the air column, beginning from the windway or the mouth. It is due to this basic difference that it is easier to make an ocarina because the position of the tone holes are not the deciding factor. You have the liberty to place them anywhere on the surface of the instrument and your ocarina would still work just fine. One point that you need to note here is that the hole at the bottom of your instrument is the sound hole and you should see to it that this hole is always kept open.

How to Play an Ocarina

Just catch hold of the notes of the song you wish to play on your instrument and follow the directions. In the music notations for beginners, you’ll also find a small diagram below each note, which describes which holes are to be covered and which ones are to be left open, to create that particular note. This way, even if you cannot boast of a good knowledge of musical instruments and notations, you can easily teach yourself to play the ocarina. Once you have learned to play the basic notes, you can begin to experiment and who knows? You might end up creating a new tune altogether! To begin playing notes on your ocarina, just follow the simple steps given below.

Step 1: Learning to Hold the Ocarina
The first thing you should learn is how to hold the ocarina while playing it. Hold it in a way that it is at an angle instead of being horizontal, and the mouthpiece through which you blow air is facing you. Use the safety cord you get with your ocarina to let it safely hang from your neck while you are playing it.

Step 2: Playing the Highest and Lowest Tones
The highest and lowest tones are the easiest to play on the ocarina. For playing the highest tone, you need to keep all the holes open, including the sound hole. The lowest tone is generated when only the sound hole is kept open and all the other holes are closed.

Step 3: Playing Different Tones
After you have learned how to play the lowest and highest tones, you can try playing different tones either by experimentation or by following a book of ocarina notes. Begin by playing simple tunes and move on to more tunes with practice. Uttering the “T” sound between notes can help you play each note sharply and clearly.

Thus, you can see that playing the ocarina is not that difficult after all, provided you are patient enough to learn the basics. During the initial days of learning how to play the instrument, make sure to take some time off to practice, for, the more you practice, the better you’d get at it. So, what are you waiting for? Get hold of your ocarina and start playing. And do let us know if you found playing the ocarina easy. Have fun!