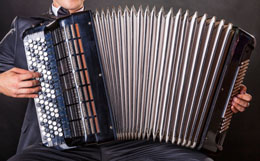 Celtic Harp
The Celtic harp is a very famous instrument in Ireland. It is the Coat of Arms of the Republic of Ireland, and also the logo of Guinness Stout, which is the most popular beverage of the land. The harp is a 4 feet tall instrument, with a tuning that has 34 or 47 strings. It is one of the oldest string instruments, with a history that dates back to 5000 years. The melody of the harp has certainly stood the test of time. It was also an important and popular tool among the ancient composers.

Accordion
Among all the music instruments of Ireland, the accordion can be considered a modern one. It is not a part of the traditional Irish music that evolved after hundreds of decades, but it is a modern development.

Great Irish Warpipes
The Great Irish Warpipes hold an extremely important role in the history of Ireland. These pipes are actually cousins of the highland pipes of Scotland, and are often played in combination with other stringed instruments.

Guitar
The classical guitar in Irish folk music is usually played in a finger-picking pattern. Many artists like David Howell Evans (better known as Edge) and Adam Clayton, have incorporated the melodies of guitars into Irish music.

Fiddle
When it comes to joyous as well as sad melodies, these musicians turn to the fiddle (violin). Among the family of Irish music instruments, this one is derived from the string family of central Europe. Though the fiddle originated in nations like Germany, Hungary, and Austria, it is enjoyed immensely by the Irish people.

Beautiful melodies of acoustic rock are created by musical instruments from Ireland. Musical culture thrives in the Irish society.