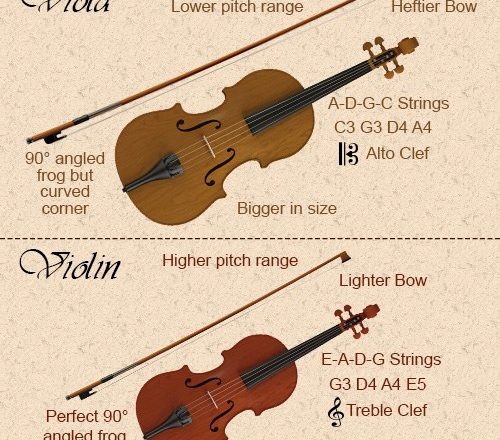 Person who plays Viola ~ Violist, Viola Player
Person who plays Violin ~ Violinist, Fiddler
It is tricky to gauge the differences between a viola and a violin for someone who doesn’t have a musical background. They are identical in many ways. Viola is just like an elder version of the violin. Though they are similar in shape, a viola is slightly larger than a violin in size, which makes it difficult to play for those with smaller hands. These two belong to the family of stringed instruments, with cello being the third member.

The overall construction of both viola and violin is same, though the technique to play the viola is slightly different from that of a violin, owing to the larger size of a viola. Viola is comparatively easier to play, if you understand the auto clef pattern. A full-sized viola has a longer body than a full-sized violin, but no size has been standardized for a viola. It is rarely engaged as a solo musical instrument. It is often used to fill in harmonies.

Let’s look at the major differences between these melodious musical instruments. 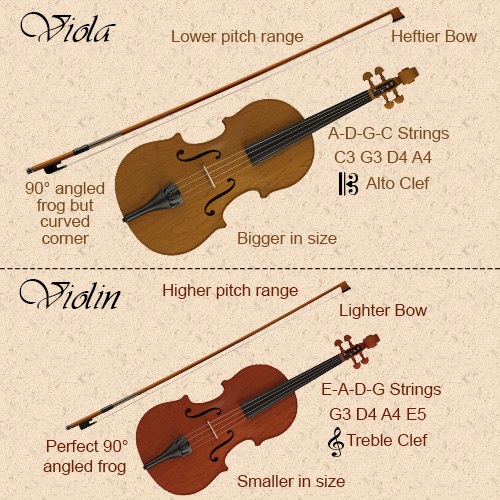 Size
♪ Viola is bigger than a violin with greater width and length.♬ Violin is slightly smaller than a viola in width and length.
Bow
♪ The bow of a viola is heavier than that of a violin.
♪ Its frog is 90° angled with a curved or rounded corner.
♪ Its average bow weight is 70 grams.♬ Violin’s bow is lighter as compared to that of a viola.
♬ Violin’s bow has a straight 90° angle frog.
♬ Its average bow weight is 60 grams.
Note: Frog is the lower part of the bow which is held in the hand.
Strings and Range
♪ Viola has a C string in place of Violin’s E string. Therefore, A-D-G-C is its string pattern. These strings are thicker making the sound of a viola slower than that of the violin.
♪ Standard Tuning: C3 G3 D4 A4, which is a perfect fifth below a violin’s tuning.♬ Violin has an E string, hence it is strung in E-A-D-G pattern. These strings are thinner than the viola’s strings.
♬ Standard Tuning: G3 D4 A4 E5, tuned in perfect fifths in ascending order.
Note: Perfect fifth is the musical interval conforming to a pair of pitches with the frequency ratio 3:2. It is made up of seven semitones (half steps), and is highly consonant.
Musical Clef
♪ Violas read alto clef, a rarely used note. Sometimes, they can also read treble clef.♬ All music is written and read in treble clef.
Sound
♪ Sound produced by a viola is deeper and warmer than that of a violin, as it is the middle voice of the string instruments family, between the cello and the violin.
♬ Violin is the highest-pitched member in the violin family, hence the sound produced by a violin is higher-pitched as compared to that of a viola.
Bridge
♪ Violas have an arched bridge.♬ Here, the bridge is more arched.
Music Played
♪ It is used in orchestral music, and sometimes featured in contemporary pop music.
♬ It is featured in classical, folk, jazz, soft rock, country, and Arabic music.
Our Say!
♪ If you have an easy-going personality, and like music that soothes your mind and soul, opt for a viola.
♬ If being in the limelight is what you desire, then you should learn to play the violin!