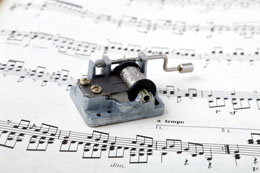 If you are uncontrollably drawn towards music, and also enjoy working on mechanical devices, then making a music box is just the right activity for you. This musical device was first produced in bulk in Switzerland, in the 19th century. Later, the whole of Europe was engulfed by its charm. The music is produced by a set of pins placed on a rotating cylinder. When the cylinder turns, it plucks the tuned teeth of a steel comb, bringing forth a tune. The components of this instrument include a bedpan (heavy metal foundation), spring motor, windup key or ratchet lever to wind up the spring motor, comb with several tuned teeth of different lengths, metallic cylinder, and multiple tune cylinders. If you are making this instrument on your own, you will need a ceramic trinket box with a lid, musical movement, a pencil, glue, and some decorating material.

Step 2: Now, place the musical movement in the box that you have chosen. Just make sure that the winding key faces an interior side of the box. Using a pencil to mark the spot where the box meets the winding key. Make a pencil indentation there.

Step 3: Create a hole for the winding key, by pressing the pencil inward at the indentation spot, from the outside. Unruly or irregular edges surrounding the box are directed inside the box, by this technique.

Step 4: Paint the box and embellish it with stickers, buttons, beads, or stamps. Then, glue a square of wood to the center front of the inner box bottom. The musical movement will have to be glued to this.

Step 5: There will be a manual with the musical movement. So, check it for a few instructions related to the winding key. Detach the winding screw from the box, if the two are attached. Then, using the hot glue gun, coat the side of the box that has the winding key.

Step 6: Next, press the musical movement against the interior part of the box, which will line up the hole for the winding screw, with the hole in the box.