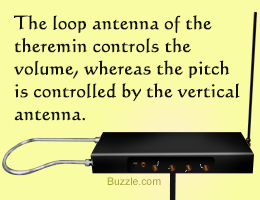 Did You Know?The theremin was invented by a Russian physicist named Lev Sergeyevich Termen in 1920, which was patented in the United States of America in 1928. This instrument was named after the westernized version of his name which is Léon Theremin.The Russian Government had originally sponsored a project to research on proximity sensors, which resulted in the invention of the theremin instrument. This instrument has been used in musical concerts, movie soundtracks, by rock bands, etc. The most famous movies that have made use of this instrument are Miklós Rózsa’s movies, namely Spellbound and The Lost Weekend, Bernard Herrmann’s movie The Day the Earth Stood Still, the 2004 movie The Machinist, the 1994 movie Ed Wood, etc. The person who operates a theremin is called a thereminist, and the sound produced by this instrument sounds a little like the one produced by a saxophone. When this instrument was first invented, it looked like a writing desk, but now with time, it looks sleek and small, like a DVD player. This Buzzle write-up tells you how this instrument works.

Working of a Theremin► The theremin has an electromagnetic field between its two antennae, and for it to produce sound, a thereminist has to stand in between them and wave his hands in proximity to the antennae to interrupt the magnetic field.► Due to this interruption, every time the thereminist waves his hands, a signal in the form of static waves is sent to the antennae, to produce sound.► The vertical antenna is to control pitch, and the horizontal hook-like antenna is for volume control.► The pitch control antenna is a pitch circuit that uses two radio frequency (RF) oscillators: fixed and variable.► Waves are generated at static frequency by the fixed oscillator, whereas the variable oscillator, which is connected to the vertical antenna, produces a range of frequencies.► Using a process called heterodyning, the signals from the fixed and variable oscillators are mixed.►► Heterodyning is a radio and signaling process that mixes two oscillating waveforms, to create a new waveform. For example, we have one oscillator on 600 kHz and another on 605 kHz. By mixing the two frequencies, the sum will be 1205 kHz, and the difference is 5 kHz. The audible frequency is 5 kHz, as this instrument amplifies it and then outputs the subtracted difference in the form of audible tone, from a loudspeaker that is connected to the instrument.► The volume circuit controls the level of tone that is generated by the pitch circuit, when the electromagnetic field around this antenna gets disrupted by the player’s waving hand.► This second circuit works in the same way like the pitch circuit does, but it only works with the volume level of the tone produced by the theremin.► Depending on the distance at which the player is standing from the two antennae, the level of volume and pitch differs. The further away the player is from the antennae, lower will be the sound produced by this instrument, and the other way round.► The right hand controls the pitch, and the left controls the volume.
The theremins that are produced today are much smaller and compact, with some having dials to control the volume level and only one antenna, but they are not as effective as the ones that have two antennae. Really good-quality theremins that are produced today, still maintain two antennae, but the main body of this instrument is small and rectangular like a DVD played. There have been some notable thereminists in the past, for their amazing work in mastering this device. Léon Theremin’s protégée, Lydia Kavina is a leading thereminist today, who not only plays this fascinating instrument, but also teaches people how to play it. Playing a theremin is difficult, but understanding how it works, makes it easier to play it. Proximity is the key point needed while playing this instrument to produce the best sound.