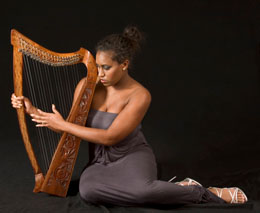 Looking nineteen,
And not a day older,
And the harp with a woman’s head
Leaned against her shoulder.
Her thin fingers, moving
In the thin, tall strings,
Were weav-weav-weaving
Wonderful things.
~ Edna St. Vincent Millay (from The Harp-Weaver)

Doesn’t this elegantly contoured, stringed instrument look like it has been carved out of pure fairytale fantasy? The mere mention of the word harp makes the mind conjure up pictures of a beautiful lady dressed in a long, billowing attire sitting by the huge gothic window of her parlor…. her eyes gazing out of the window, her gaze lost among the silhouettes of the distant mountains that are overcast by dark, thundering clouds…. a buoyant breeze tossing her gilded locks against her fair cheeks as she gently strums the strings of her exquisitely carved harp, playing a melody that is drunk with the intoxicating notes of ethereal melancholy…. And then there is also the famous fairy tale about Jack who climbs the magic beanstalk and steals the resident giant’s magical harp! So, you see, the connection between harps and fairytale fantasy is hard to ignore and this, coupled with the beautiful notes elicited by its strings when dexterous fingers nimbly play along them, make harps one of the most beautiful musical instruments in the world – both in terms of its visual appeal as well as its acoustic aesthetics. The following segment discloses some very interesting information about the harp which, I am sure, will amaze you.

Information on Harp Instrument
I’m sure all of you have seen a harp, whether in reality, on the television or Internet or pictures of it. At the first glance, it looks roughly like a right-angled triangle with curved sides mounted on a short, straight base. The ‘hypotenuse’ side of this triangle, i.e., the longest arm is usually straight or slanted but never curved, unlike the other two arms. When made to stand on its short base, vertical strings fill up the space inside this triangular frame and these are tightly stretched from end to end to produce musical vibration when strummed in the perpendicular direction by an instrumentalist’s fingers. Following are some more facts about harp:-

Structurally and chronologically, harps are very closely related to another variety of stringed musical instrument – the lyre, mention of which can be found in a lot of ancient mythologies of different regions of the world such as Asia, Greece, etc. Harps were extremely popular during the Medieval and Victorian eras when minstrels, bards and troubadours traveled across Europe and performed at public places as well as in the esteemed presence of rulers, courtiers and noblemen. Despite tracing such a long journey across various different ages, harps have managed to retain their peculiar grandeur and charm and even now, no musical concert or instrumental symphony seems complete without them. With that, I’ll conclude this write up on harp instrument, sincerely hoping that you found it revelatory and interesting.