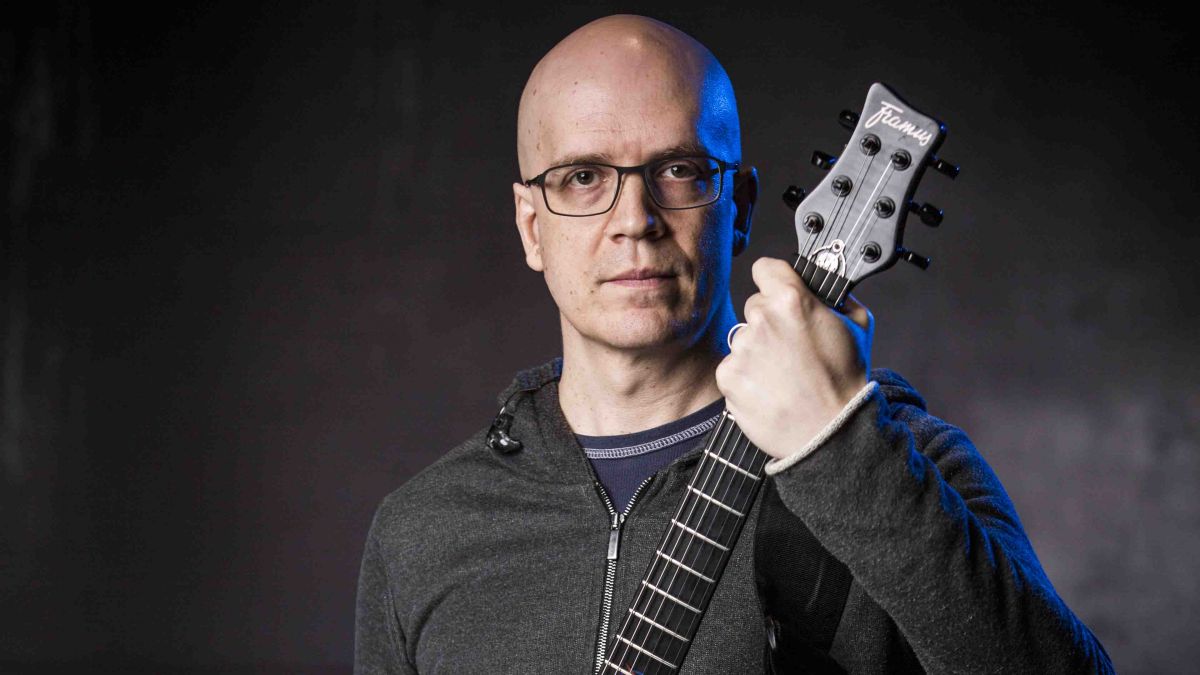 Devin Townsend is sat on a sofa at his record label HQ with a massive grin on his face, telling MusicRadar about new album Transcendence – one that we couldn’t help but notice contained more lead guitar work than usual from the Canadian progressive metal alchemist.

“But I’d never taken the time to articulate why the music is supposed to do what it does,” he continues playfully.

“Why do you wank? For example, Deconstruction was not an album I recorded because I wanted to make complicated prog music; it was because I was pissed off that kind of music had become a thing. It was me saying, ‘This is all bullshit!’

“So, this time, with Transcendence, the concept became how to get out of my comfort zone so I don’t repeat myself. It felt like there was gas in the tank again!”

“The reason I play weird arpeggios or phrases is just because I couldn’t do it the way Jason Becker did it. I can’t do Paul Gilbert picking or any wicked sweeps; I just know four shapes… but in different tunings, they became totally different tonalities.

“The ones I could do well I’d add to the rest, and by the end, I had a bunch of things that were unique to me purely because it was the path of least resistance. Not because I was trying to be forward-thinking; it was more about finding my own way.

“It didn’t happen overnight – it took me 20 years of sucking before I didn’t suck as bad. Eventually, muscle memory kicked in, and it became my style…

“I don’t usually play leads on my records, but I decided to add a few on this one, because I’d never really thought about them before. Typically, when there’s a space in a song, I’m not the guy that thinks it needs a raging guitar solo; I’m the guy that wants something melodic or symphonic… because to me that kind of music is more interesting.

“But now I have two signature guitars coming out with Framus, signature pickups, picks, wahs and a fucking delay pedal, so I figured I should probably do some!”

2. Don’t let anyone tell you what to sound like

“I remember once reading someone being critical about me online, and writing, ‘AC/DC didn’t use or need effects!’ I thought to myself, ‘I’m not AC/DC and I fuckin’ love effects!’

“Even my dad would complain there was too much reverb on everything and tell me to dry it out… so my second tip is: fuck ’em! If you want to do something, just do it. If people don’t like it, let them make their own music.

“That’s not me being passive-aggressive; it’s just me saying if you don’t like what I sound like, please don’t feel that I should change. Feel free to do something else or better. I’m just trying to be accurate to the person I am, and the echo/reverb is part of my style.

If you want to do something, just do it. If people don’t like it, let them make their own music

“Sure, I like Scorpions and want to play on top of a mountain, but ultimately, ambience is about interacting with the past. I write with lots of delay and reverb because I don’t have a drum machine with me. I almost interact with the reverb and delay.

“So if you feel you need a ring modulator in your rig, maybe it’s your style. That doesn’t mean it’s better or worse than Angus Young. I’m clearly not Van Halen; I’m Dev, and this is what I like… finding what you like is actually a hard thing!”

3. Give away your secrets

“I find the people that often get left behind are the ones that are too protective.

“That’s what I liked about Nolly Getgood at first: I’d ask him how he’d get such a great snare sound and he’d say, ‘I do this!’ because he’s not insecure about it. If you have any intentions of inspiring people to make their own music, you should want them to understand.

“What I do is the middle-class white Canadian male version of how I perceive the fucked-up of infinity. I’m just one of billions of people; through the gauze of my upbringing, this is just how I see things, so [my upcoming] book is asking people, ‘What’s your sound? Here are my delay settings – go find your own!’

“Maybe start off by replicating it, but why would you want to be me? You are just as talented as anyone else. So, as an artist, you shouldn’t be afraid to give it all away.”

“Somebody told me once that they were really intimidated whenever they’d play with other people. And I told them whenever I’m in a room with people way better than me, I’m not waiting to play my sick shapes just to prove myself. Don’t just play loud and fast – no-one wants a guy that never shuts up.

“There’s a guy I jammed with recently that was so awesome… but he didn’t listen to a goddamn thing. He was so awesome, I was tired within five minutes and waiting for him to shut the fuck up, listen to the drummer and start making music. He was completely oblivious to anything other than, ‘Hey guys, look how great I am!’

“I feel like I can play with any musician in the world, because I understand when the worst thing I could possibly do is try and add to something that’s already good. If you can contribute by doing what’s needed, that’s much better.

“That’s why I love bass, man… Who knows, one day you might see me playing bass and singing. You can make long complicated pieces of music very quickly by listening to each other. If you know how to listen, you can play with anybody.”

“I was asked to write a book, and I had no idea what to write about. Everyone was doing autobiographies, but I didn’t want to be the guy going, ‘In ’84, I snorted a line of ants off a hooker’s tits!’ I don’t really have Mötley Crüe stories. I’m not really here to party!

“So, the angle I took was trying to explain things to those with similar aspirations, how they could carve out a career doing non-commercial stuff and how I’ve been able to do that with the help of the people around me. This is why and how the creative process exists. I needed something that had value to me artistically, and that’s what it became.

“It was cathartic, asking why it works this way: how the business works, what decisions are good or bad. Writing it was such an eye-opener because it forced me to confront things in my personality or creative process to learn why certain things didn’t work.

Everyone was doing autobiographies, but I didn’t want to be the guy going, ‘In ’84, I snorted a line of ants off a hooker’s tits!’

“It’s called Only Half There and looks at why I have evolved into the person I am, most of it being cause and effect. This happened and that happened, provoking either good decisions or bad decisions to lead to my next one.

“The self-analysis that came with Transcendence and doing the book ultimately helped me understand why I am creative in the way I am.”

Transendence is out on 9 September; Only Half There is released in October. The Devin Townsend Project tour the UK in March 2016: