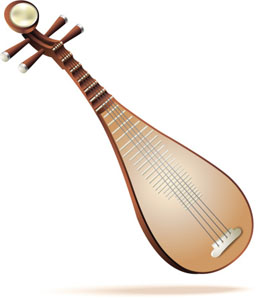 Music certainly knows no language, nor it has any barriers. Ancient China witnessed many masterpieces in terms of music. There have been some great musicians, who created some remarkable melodies, which have made a place in the history of musical culture. The instruments are generally classified into three segments ― string, percussion, and wind instruments. These categories are also divided as per the kind of material used, for example bamboo, wood, clay, metal, etc.

The Dizi
Chinese flutes were seen in different types of varieties. Dizi is one of the kinds that belongs to this category. It is particularly used to compose Chinese folk music. It is made of bamboo. There are many stories that are associated with the origins of the Dizi. Some believe it was the Yellow Emperor who conceptualized the idea and got it made, whereas others believe it was imported during the Han dynasty.

The Qin
Qin, also known as Guqin in the modern times, is hold in high regards by the Chinese. It has been associated with Confucius, the Chinese philosopher, and also with other great scholars. It has thus been used for ritual ceremonies and has been a symbol of high culture.

The Pipa
Pipa is next on the list. For the last two thousand years, it has been used to create soothing melodies in China; although today, it is seen only in museums. Some of its earlier forms existed during the Qin dynasty. As time passed, it became particularly popular by the Tang Era.

The Ruan
Its origins go back to over two thousand years. It was named after one of the reputed Seven Sages of the Bamboo Grove. Its modern version is structured differently.

The zhu
Zhu is not used anymore. It became popular in the Warring States Period. There have been differences of opinion on the way it was used. Some say it was plucked with a stick, whereas others feel the stick was bounced on the string, to produce the sound.

The Muyu
Yet another musical instrument that has many stories attached to it is the Muyu, which is also known as ‘Wooden fish’. It is actually a wooden instrument. The legends associated with it have all taken place in China. It is used especially for rituals by monks.

The Yunluo
Drawings recovered from the olden era depict Yunluo with five gongs. Today, there are many modern versions of the same. Now, one can find close to 29 gongs with varied diameters.

These were some of the musical instruments used in ancient China and some of them are still being used. These instruments have certainly helped to keep alive the many traditions of China.