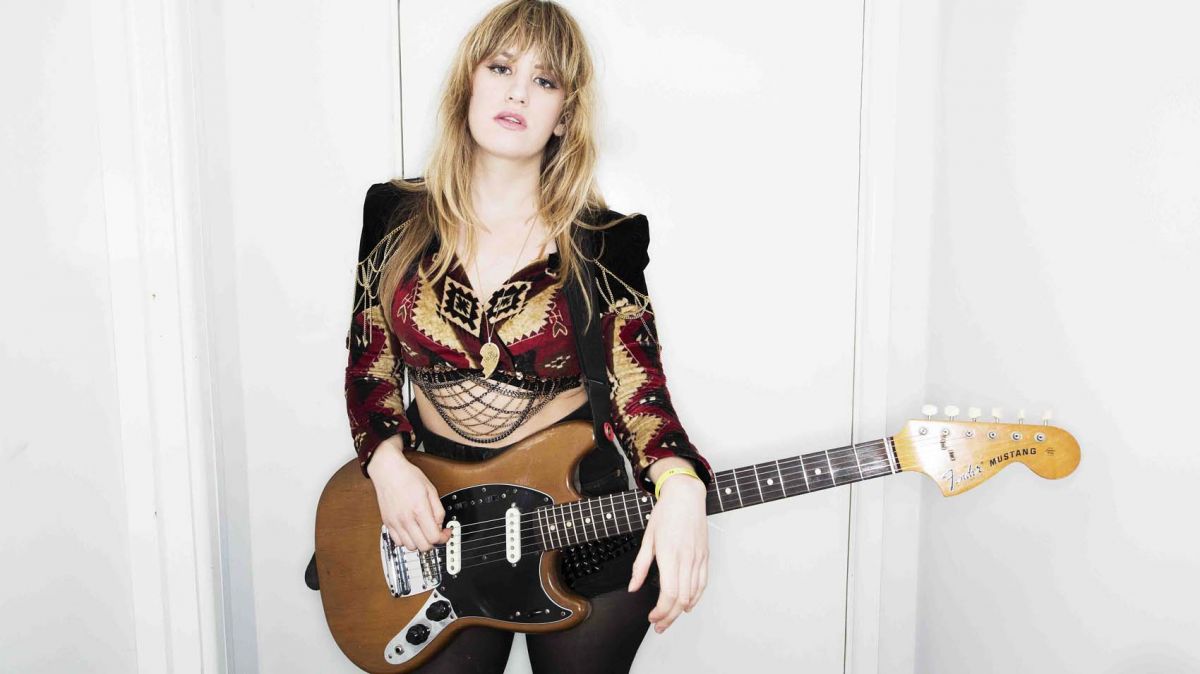 LA duo Deap Vally are renowned for their rasping, rampaging duals and guitarist Lindsey Troy [pictured, right] has carved out a niche producing the type of low, groove-laden licks that could level a small housing estate.

“I’d say that’s about up to eighth grade, when I was about 13 years old,” she clarifies.

“It’s always hard for me to make top 10 anything, but I have very clear memories of what I was listening to on repeat in my youth. And that stuff has such a huge impact on you. Some of these things are embarrassing, but I don’t really care…”

It makes some sense, then, that a lot of her 10 records picks feature killer, grooving bass lines, or soulful, gritty vocalists. We gave Lindsey free rein on the theme for this list, and she picked 10 album that soundtracked her youth.

Deap Vally’s new album, Femejism, is out on 16 September via Nevado Records.

“The first cassette tape I ever owned, when I was in fourth grade, was Alanis Morissette’s Jagged Little Pill.

We started a little fake band, which was called The Alanis Morissettes

“That album had such a huge effect on me and all of my best girlfriends. We were all obsessed with it. We started a little fake band, which was called The Alanis Morissettes. We would put the tape on and I had instruments in my house, so we would play along, but not play the right notes or chords or anything.

“My one friend was on drums made of tupperware. Apparently, she told me later, that I said that I was going to have to kick her out of the band if she didn’t buy real drums! I guess I was tough!”

“This is the earliest record I had on this list. Jagged Little Pill was my first cassette tape, but my sister had Dookie and we would listen to that when I was in like third grade.

“It’s funny, because there are words on there that I definitely didn’t know what they meant. There are some, err, vulgarities and expressions! It was just a time in my life and it struck a chord with me as a kid.

“It was that perfect sweet spot of rock ’n’ roll and punk with pop sensibilities, and it had that attitude in the lyrics.”

“I grew up around rock ’n’ roll music, but I could really relate to this because it was a chick, you know? So I just thought Courtney Love was a total badass and I still do.

It’s like the opposite of ‘male gaze’. She was not at all reserved or polite or demure

“That record is so good. It’s so heavy and raw and balls-y and gritty, but it also has really great songs and really catchy melodies. She looked so cool in her baby doll dresses, and her voice is so crazy.

“It’s like the opposite of ‘male gaze’. Even though she looked super-hot, she was not at all reserved or polite or demure. She was out of her goddam mind!”

“Fiona Apple was really unlike anyone else. I guess the closest person I might compare her to would be Nina Simone.

Her voice is unbelievable – super-raspy, smoky and beautiful

“She had a truly authentic point-of-view and personality coming through her music. It was really interesting piano playing and she had such a unique style. It’s really calamitous and chaotic and beautiful and heavy.

“And her voice is unbelievable – super-raspy, smoky and beautiful. That song Criminal was her hit song in the late ’90s and I was like, ‘Oh my god, this is so good!’”

“Number five is not exactly a controversial choice. My dad had a CD collection, and I would just pull stuff from it sometimes and listen to it.

Come Together had that awesome bassline. It’s so groovy and trippy

“I remember that record very clearly and I would listen to it a lot in Junior High. I have a very clear image of the cover of the record and the first song on the record, Come Together, had that awesome bassline. It’s so groovy and trippy. It’s the funkiest sound.

“The Beatles are still, if not my favourite band, then they’re in the top two!”

“That record, I listened to it non-stop. Heard It Through The Grapevine: oh my god. Another big bassline and it was so good, so groovy.

“Motown really struck a chord with me, that style. It was the rhythm, the grooviness, the rhythm and blues vocal melodies. They had a punch to them and an incredible vocal range.

“That music was really fun to sing along to. I have a lot of – I’ve been told – soul influence in my voice, and I guess that would explain part of that. I don’t even remember how I ended up with that record.”

“This record was everywhere, it was so huge. Again, it was another role model for me, [in] Gwen Stefani.

“She was such a killer performer and she had a real interesting, killer voice. It’s funny, my whole family loved that record. Most of these records, actually, on this list, everyone in my family liked them.

“I have this memory of my dad. He would get on these sprees before school in the morning, where he would blast a record in the house, and I remember him blasting that song every morning for a while. It was pretty funny.”

“This might come as a surprise to some people, but this was another huge role model to me when I was young.

“I copied exactly the way she sounded, and that was kind of the start [of me singing]. Those were the early family band days [Lindsey’s first group with her sister]. We would go to coffee houses and perform Jewel songs, and my sister jokes now that we were like Jewel clones.

“Now, as an adult, it’s a record that I’d say would fall into that stereotypical female singer/songwriter music, which I’ve gotten more and more annoyed with, but I would be lying if I said it didn’t play a big part in my youth.”

“In Junior High, 40oz To Freedom hit me and everyone else around me. I guess it was rock ’n’ roll and punk and surfy and groovy and rebellious, all at the same time.

At the time they were the one band that everybody loved

“There was a soulful voice and catchy guitar lines. At the time, they were the one band that everybody loved, and then suddenly we hit this age where it became the most uncool band to like and everyone hated them.

“I guess it really represented a mainstream thing in San Diego, so then all the punk and alternative kids started rebelling against that – even though everyone came out of that and grew up listening to that! It’s a classic story.”

“This was my coming-of-age album, and they were also my heartthrobs.

“I was madly in love with Anthony Kiedis and Flea. I was so torn between the two of them. We were in a love triangle and it was very complicated.

“I feel like I rediscovered them recently. They headlined a festival we were playing and I saw them and I realised I had such a soft spot for them. Those early records were so good. It was such interesting, idiosyncratic, bizarre music, and it’s so cool that it took off and appealed to so many people. It lives in a world of its own.”