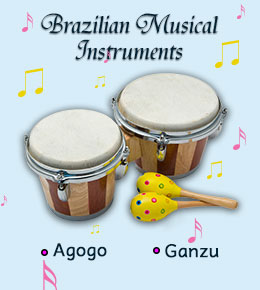 Music is the main essence of the soul of the people of Brazil. We all know about the popularity of music in Brazil. The music is heavily influenced by the Portuguese culture. Like the vibrancy of the culture, the music here too is equally diverse and pulsating, full of energy and life.

This is probably why there are so many different genres of Brazilian music. Today, Brazil boasts of some of the most renowned musicians of all times.The musical tradition varies from every region.

Here, we shall take a look at some of the important Brazilian musical instruments that have been used to compose beautiful melodies.

The agogô was used as a part of ceremonial music compositions in olden days. An agogô actually means a gong or bell. This is also the most oldest musical instrument to be used in Samba music.

AtabaqueThis Brazilian musical instrument is basically made of a special wood called Jacaranda from Brazil. It is like a hand drum that is used in many religious styles of music.

BateriaBateria basically refers to a set of drums in the Portuguese language. These set of instruments may include Surdo, Chocalho, agogô, pandeiro, repinique, etc.

GanzáThe ganzá is a cylindrical-shaped musical instrument. This cylinder is made up of a handwoven basket that is hollow from within. This basket is filled with stones and metal balls. The basic concept of the ganzá is based on a rattle. This instrument is also used in Samba music.

PandeiroA pandeiro is on similar lines to the tambourine. It needs to be shaken so that sound can be produced. There are many notable musicians who have gained popularity as being some of the best-known pandeiro players. This instrument can be modified to produce a range of musical notes. It needs to be held in one hand and needs to be struck on the other hand for the sound.

Shekere/XequerêThis musical instrument has its base in Africa. It is made of the shells of a fruit from a plant known as gourd. As every shape is different, the sound that is produced also varies from this musical instrument. In Brazil, this instrument is wrapped in a net. The net consists of little plastic balls that are threaded into the net.

Some other instruments that form a part of Brazilian music include Reco-reco, Berimbau, Tambourine/Tamborim, Cavaquinho, etc.

These were some of the musical instruments that have been used to create beautiful compositions since the ancient days. No wonder, music lies in the blood of all Brazilians!