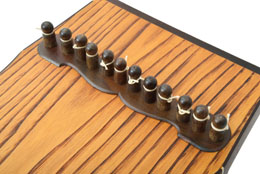 The origin of music in Korea can be traced back to ancient times. It gradually grew and gained importance in the courts of all Korean dynasties. Back then, there were four main genres of Korean music – folk, classical, devotional and court music. Over a period of time, music in Korea started evolving and it slowly began catering to a global audience, rather than restricting itself to its own shores. The fact that contemporary Korean music is a rage in the whole of Asia is a testament to its growth.

The recent case of plagiarism, wherein an Indian music composer was accused of ripping off a Korean song for a Bollywood film, is a good example of the impact and the popularity of Korean music all over the world. Speaking of popularity, Korean musical instruments aren’t lagging that far behind either. They have been attracting tremendous attention of late, not just in Asia, but elsewhere as well. On that note, let us take a look at some popular instruments that made Korean music into what it is today. A majority of traditional and contemporary choices happen to belong to the category of percussion, woodwind and string instruments. Let us have a look at the different instruments belonging to each of these categories:

A unique characteristic of Korean string instruments is that with the exception of the yanggeum which has metal strings, most of the other string instruments comprise strings made from silk. The yanggeum can have anywhere between 72 and 104 strings wherein the strings are divided into different groups. It is played by striking the strings using a bamboo stick. Therefore, it is often referred to as a string as well as percussion instrument. The gayageum or kayagum can very well be labeled the signature instrument of Korea. It is a 20-stringed instrument made out of wood and is small enough to rest on a musician’s lap. It requires the musician to pluck the silk strings with one hand and use the other hand to adjust the movable bridge in order to play different notes.

The daegeum is one of the oldest wind instruments of Korea. It is a side-blown bamboo flute which has been used for ages in different forms of Korean music. Danso or tanso is an end-blown flute that produces a unique sound which makes it suitable for Korean folk music. The hun is a spherical instrument made from clay that has 4-5 blowing holes on its surface. It produces a low sound that otherwise is quite similar to the ocarina. The piri is typically made out of bamboo and produces a tone that resembles an oboe.

The jing is a traditional Korean gong. Usually made from brass, it is struck by a hammer that is layered with soft cloth to smoothen the texture of the sound produced. It is typically played at the onset of ceremonies and special occasions. The janggu is an ancient Korean drum that resembles an hourglass and has two playing surfaces. It can be played either using one’s bare hands or by striking it with a hammer. The pyeongyeong is a unique Korean percussion instrument that comprises sixteen slabs of pumice stone which are struck with a hammer. Each slab has a different thickness which produces a different musical note.