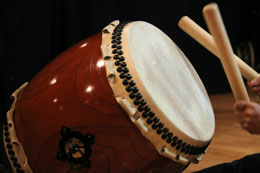 Whenever you want to study the culture, history and social views of a particular country, the best way to do it is by knowing about the different visual and performing arts that are prevalent in the country. Music is one such element of performing art that offers us an insight about the social culture of a nation. In Japan, music is all about refinement and the most popular music forms in the Nara period were Gagaku and Shomyo, also known as court music. Gagaku itself means refined and polished music. Many traditional musical instruments of Japan are very much in use today and they form the basis of the history of Japanese music. String, wind and percussion instruments are predominant in traditional Japanese music. Here we will take a look at some of the musical instruments that are native to Japan.

Biwa
Biwa is a kind of short necked lute that was predominantly used in Gagaku. It is a string instrument and there are three different variations of the Biwa. One is the Gaku Biwa, and its main distinguishing feature is that the pegs for the strings are small and stuby. The second is known as the Chikuzen Biwa and these instruments have either four strings with five bridges or five strings with five bridges. The third type of Biwa is known as the Satsuma Biwa which is characterized by its large size with high bridges.

Shinobue
Shinobue is a flute that is made of bamboo and it is a wind instrument. Traditionally a Shinobue was used in Kabuki and Noh theater music as well as in Japanese folk songs. Unlike other flutes which are coated with bark, a Shinobue has a bare bamboo outer surface. Sometimes, the two ends of the Shinobue are enfolded with bark and the rest of the flute body is left as it is. To make the Shinobue look more attractive and to prevent the bamboo from splitting, it is sometimes lacquered. A Shinobue has seven finger holes although there are some Shinobues with six finger holes. Shinobue makes a very deep resonating and high pitched sound and it is generally used in Japanese theater and folk songs.

Taiko
The literal translation of Taiko is “big drum”. Taiko is actually not any one instrument but a series of drums that are of varying sizes. A Taiko is mounted on a stand before they are played by a series of musicians. It is made out of cowhide and a Bachi is used to strike the surface of the Taiko. A Taiko drum has a deep rumbling sound and was supposedly used in the battlefield.