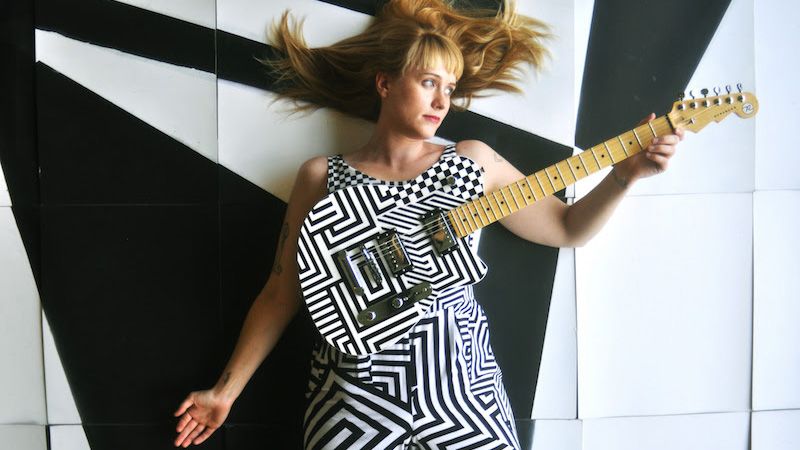 For someone who describes her relationship with the guitar as “complicated”, Jenn Wasner has built quite a reputation as a player.

Now, Wasner continues her unpredictable six-string path with Flock Of Dimes, an electronic-infused take on quirky pop that brings lush synths to the forefront, while still retaining the guitarist’s keen sense of melody and panoramic arpeggiated chords.

Suffice to say, there’s a lot going on in Wasner’s guitar world, so we took the opportunity to quiz her on how she got started and why there’s not a guitarist dead or alive who she’d take lessons from…

Her tasteful playing and deft songwriting with indie-rockers Wye Oak has not only landed her plaudits aplenty, but also a signature model with Reverend, the eye-boggling and highly versatile JW-1.

1. What was your first guitar and when did you get it?

“My mom taught me my first few chords on guitar, so I guess technically my first guitar was the old Fender acoustic that she kept in her closet. I didn’t get a proper guitar of my own until much, much later – I wasn’t primarily a guitarist, so I mostly just borrowed them from other people. The first guitar I actually purchased was my first of many Reverend guitars – a sunburst Jetstream HB.”

2. The building’s burning down – what one guitar do you save?

“Probably my ’60s-era semi-hollow body Harmony Rocket – because it was a gift from a friend, and because it’s old and beautiful and difficult to replace!”

3. Is there a guitar, or piece of gear, that you regret letting go?

“Yeah, I once owned a beautiful all-black ’70s-era Fender Mustang that I wish I had held onto.”

I wasn’t primarily a guitarist, so I mostly just borrowed guitars from other people

4. And what’s the next piece of gear you’d like to acquire?

“I’m hoping to get a couple of pedals from a great company called Chase Bliss Audio.”

5. Is there an aspect of guitar playing that you’d like to be better at?

“You know, I honestly don’t really spend a lot of time thinking about this sort of thing – I’m a big believer in inventiveness and creativity over pure chops/technicality. I’m always working to improve at all of the instruments I play, but I believe that innovation exists at every point on the spectrum.”

6. When did you last practise and what did you play?

“For me, practising consists mostly of learning to play other people’s songs. Right now, I’m playing Amelia by Joni Mitchell on the guitar a lot, and a lot of Kate Bush and Debussy on the piano.”

7. If you could have a guitar lesson from one guitarist, dead or alive, who would it be?

“Isn’t that what YouTube is for? Just kidding. I’ve never actually taken a guitar lesson, though, so why start now?”

8. What item of gear would you take with you to a desert island?

“If I only get one, it’s gotta be my computer. I can create any sound or idea I can imagine with it. I would miss the hands-on feel of playing an instrument, but it would be much worse to be tormented by not being able to document any of my ideas.”

9. What’s the worst thing that’s ever happened to you onstage?

“Of course, I have no shortage of stories of amps exploding/cables shorting out/any number of other gear-related catastrophes. Just recently we played a show in Austin, TX where we were outdoors in 100+°F [38+℃] degree weather. The show was actually great, but it was a true test of physical endurance.”

10. What advice would you give your younger self about playing the guitar?

Wye Oak’s Tween is out now on City Slang records; Flock Of Dimes’ If You See Me, Say Yes is out on 23 September via Partisan Records. Flock Of Dimes plays The Victoria in Hackney on 4 October.